So I went a little gaga at the Glendale Quilt Show.  After swearing off spending money on quilting, too.

I took a machine quilting class from Harriet Hargrave.  She's a hoot - had some great stories, and really made traditional quilting fearless.  I was amazed by her incredible quilting all done on her DSM.  She took a lot of the intimidation out of the process.

Of course getting there was a total panic.... here's my story:  I was supposed to take classes at Glendale for all four days of the show.  Harriet's class (two days long) and two other one-day classes, plus a Saturday night class.  The two one-day classes were cancelled, and somehow I got it in my head that Harriet's class was on Saturday and Sunday.  I spent most of last week slowly prepping for Harriet's class, so I had SOME of the stuff we needed ready.  Still getting ready for the class, on Thursday morning at 8am, I cut out my show badge and looked at the letter that came with it.  The letter gave the dates of the class, which I glanced at but didn't pay much attention to... When I was done prepping for class, I sat down at the computer to fool around for a while.  This was 8am on Thursday. That's when I realized that 3/18 WAS Thursday, not Saturday.  I dropped everything, tossed a few more tools and supplies in a bag, ran off to shower and dress.  I grabbed a quick breakfast and raced off to Glendale. It was 8:30 am when I left the house, and I arrived, breathless, at 9am and slipped into the classroom.  I was already an hour late... sigh...  Not an auspicious start.. and I was embarrassed as hell walking in so late... but I made it...

Finally got into the swing of things by the time we started actually sewing, and on Friday, I brought the rest of the supplies I hadn't had time to gather up on Thursday.  I hate showing up unprepared for class.  So humliating.
Anyway, after two days of classes, I went back to the show on Saturday to actually attend the show itself, look at the quilts, and shop.

I fell off the no-fabric-buy wagon and bought two panels, a piece of cat fabric, a small piece of dark teal for the borders of my OBW quilt.  I also bought a kit of fabric that had bunnies, possums, raccoons, and squirrels - I'd been looking for this fabric for months and the only way they had it was in the kit, so now I have a kit I don't need that has fabric I wanted.  I bought a ruler and an iron cozy and a Laurel Burch bag, too.
Most important, I had fun with Kathy and Debbie at the show.  We went to lunch at Momotaro's - awesome sushi.  And there were some really nice quilts at the quilt show, too.

Today I am grateful for beauty in the world... in MY world... blue skies, the dark orange and pinks of sunset, the beautiful green of the trees that shade our house, for all the things that inspire what I do and what I love.
at March 21, 2010 No comments:

So, after getting back from the Machine Quilter's Getaway in Trinidad, CA, I have been busy...
Playing Evony, sewing, avoiding practicing on the new longarm (more on that later), playing Evony, watching TV, reading, playing Evony.
I did finish my first rag quilt and took a class on One Block Wonder quilts - not quite finished, but the strips are sewn, now just have to sew them all together.
Here's my rag quilt, which I call 'Kitty Corners'. 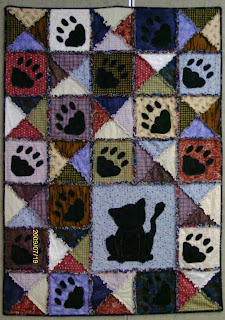 And my OBW (the strip along the bottom is the original fabric): 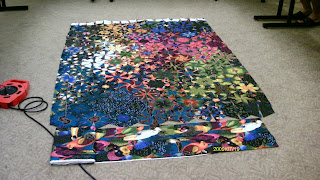 This weekend I'm taking a class on Heirloom Machine Quilting from Harriet Hargrave.  So, the rest of the week will be prepping for that class.

Oh, and here's my 'quick star quilt' from Jan Krentz's book.  I made this on a quilting cruise I took last April. 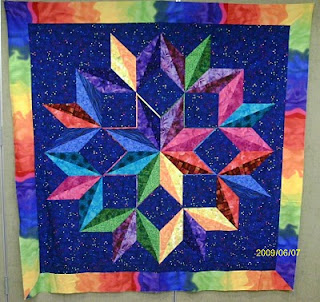 I've been kinda depressed of late, which is why I haven't practiced on my longarm or updated the blog.  I hope to pull out of it and do more soon.  The leak in the upstairs plumbing, gophers on the lawn, broken dryers... sometimes it all seems too much.  Why me?