I saw this quilt, called Rolling Waves, on Facebook.... and fell in love with the movement and flow of it.  It took some work to get the pattern (none of the links worked, but I finally got in contact with the magazine it was in and someone kind and helpful in their customer service department sent me a copy of the pattern via email.  Can't be thankful enough...


I was a bit apprehensive of my color choices as there wasn't as much contrast as there was in the pattern, but went with my first choice anyway, as I fell in love with these digital prints by Jason Yenter, one of my fave fabric designers.  One is from his line called Enchanted Garden, the other from the line Diaphanous, and while I'm not generally a fan of floral fabrics, it wasn't an 'in your face' kind of floral, so I thought it would work, and I loved the colors (though I discovered later, that it came in other color waves I liked even better... ah, hindsight)... Anyway, here is the finished quilt top (sans borders): 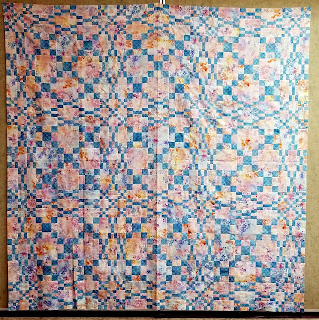 the finished quilt center is 74'x74".  I'd like to be able to use this on my king sized bed, so it needs about 10-12" on each side in the way of borders... but just 12" of background all the way around would be boring, not to mention unpleasant to look at... and I don't want to make more blocks on two sides, as that might actually make it TOO big.  What to do???  I'm thinking maybe a 3" or so strip of background, followed by a narrow (1-2" strip of the blue, followed by a 6-7" strip of more background, mitered of course... barely better than just all background, but I'm kind of not feeling inspired by anything else just yet...

Ideas are welcome!  Thanks...

I Can See Clearly Now...

Yes.  Yes I can... there is no rain to be gone, but I can still see more clearly than I've been able to in months... Why did I wait so long to see the optician?  And to make it even better, my new glasses are purple... (to match my hair, of course).

So I did get started piecing Dobby, but had to put off finishing him for several days as I had trouble finding the right shade for his eyes... Finally figured out what green I was going to use and finished up putting him together.  So glad I added him to the mix. 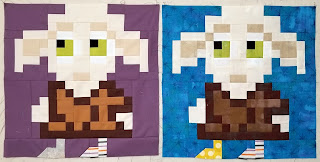 Of course, I had to make two, one for each of my Harry Potter quilts... and each one got one odd sock and one striped sock.  Dobby #1 got a dirty grey sock for his odd sock, and Dobby #2 got a yellow polka dot sock as his odd one.

I decided to put Dumbledore on the same level as Hogwarts, which opens up a spot for Dobby among the blocks above... and I will have room for the four house crests somewhere too I hope.... if not, I'll have to rethink my layout.  Maybe only one quilt will be for a king bed and the other won't need the house crests.

I finished sewing the teacups for the exchange, but since it's not 'due' til October, I've set it aside for now.

I received my BOM packet for Dear Daughter #8 today, so I've got one block cut and 1/2 pieced (all the HSTs and flip and clip corners are done and trimmed, just need to be pressed now, and put together.  (of course I have to make 4 of those blocks, but I'm chaining them, so when one is done, all are done).  There are two more blocks in the packet yet to deal with, including some applique, but I will get to them.

Busy week coming up.  Tomorrow morning, I have a guild meeting.  Weds. morning, I have my sewing group to go to, and hopefully finish up a binding I'm working on.  Maybe start sewing another one.  Wednesday night, my other guild meets and I don't want to miss this meeting - Our speaker does applique (all types - machine and hand), so I'm interested in what she has to say.  Wish she was doing a workshop, but this guild rarely books workshops as they always have to be cancelled - no one ever signs up for them - not enough to make them viable financially at least.   Thursday morning, I'm meeting a friend to trade pokemon.  Then, Thursday night is sewing again with my minigroup... Somewhere in there, I've got to get to my quilter and drop off a back for a quilt I forgot a back for.  Hopefully, I can take the quilt back on Weds. between sewing and guild, as I don't want to drive all the way home and back again.  (it's about a 1/2 hour drive each way, so home to sewing, back home, then back for the meeting (same place as sewing), then back home again doesn't make a lot of sense).  Friday, I finally get a respite, and, at least so far, I have nothing planned.

Anyone for a Cuppa?

I stayed in my jammies all day yesterday and alternated between sewing, napping and watching tv... it was a thoroughly relaxing day.  All told, I got more done than I expected to.  I finished the Knight Bus block for the HP quilt, again making two, one for each of the quilts: 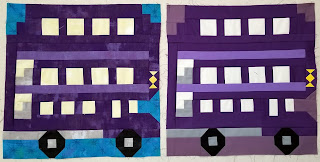 I also finished the last of the cutting for the teacup quilt I am making with my mini-group.  Since mine is the only one I actually have background fabric for, I could only actually make one block - my own.  The rest will have to wait til I have their background fabric.  Here is mine: 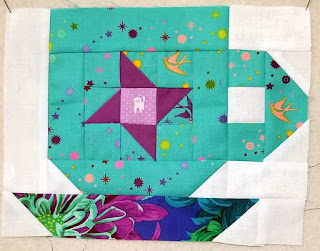 A little Tula Pink, a little Kaffe, one solid and a 30's kitty in the middle.  I'm happy with it... not my best piecing, I got a little sloppy, but it came out okay.  I have 11 more centers pieced, waiting for that background fabric.  Everyone else is using an off-white Shadowplay, but I am using White Paper Grunge because I have some teapot blocks to use with these and I want the backgrounds to be the same color (white).

Today, I'll be cutting Dobby for the HP quilt and running errands... maybe a little sewing too, we'll see.  I am running to Costco to pick up my new glasses today, so maybe I'll actually be able to see what I'm doing clearly... it's not such a good thing to go 2 1/2 years between eye exams!

Hagrid and Other Progress

I got a little behind on projects while doing Hogwart's Castle.  That was sort of to be expected... it was a two-week project, and I had to make two of them... The paper piecing patterns weren't accurate (had to resize the printing, and redraw one of them completely in EQ8, and print out my own patterns.  So I got started cutting Hagrid on Thursday.  Easy cutting so I even did a little of the piecing as well.

Friday was a no-sew day, but that was fine... Two friends and I went to on the Central Coast Quilt Run... driving from Ventura County up north to Paso Robles.  Then we trekked back south with stops in Atascadero, Morrow Bay, San Luis Obispo, Orcutt, Buellton, Santa Barbara, Carpinteria and Ventura.  10 shops in 9 hours... lots of rushing about, but it was worth it... we had fun, won some little prizes, met friends along the way, and generally had a good time... I was so tired when we got home, that I crashed within 1/2 hour of getting home...

Slept late this morning and rushed out to class, where I finished up Hagrid, cut and sewed block 6 of the Out of This World block-of-the-month, and also cut some background pieces for a teacup block I'm making (different quilt - a mini-group exchange)..... Came home and just relaxed most of the rest of the day, just couldn't get any quilting mojo going.  Maybe still recuperating from the quilt run?

Just noticed, after initially posting this picture, that I made the block wrong.. it doesn't look horrible, so I'm not sure I'm gonna change change it, I might leave it as is... (the interior square-in-a-square should have had the aqua as the middle diamond, with the black as the four triangles around it).  I'll have to think about it.

Grew restless to DO something after dinner, so I crept into the studio and cut enough fabric to make 12 teacup blocks.  That done, I pulled all the fabrics I needed for my next Harry Potter block - the Knight's Bus.  After pulling all the fabric, I decided I was too tired to do any cutting - tired enough to make stupid mistakes, but not too tired to KNOW I might make stupid mistakes, so here I am typing instead.   Tomorrow is another day...