Okay - not a baby baby, but this new-to-me Featherweight followed me home today!  Can't wait to get a chance to use her... but first.. a trip to the movies to see a preview of 'Ready Player One'.... 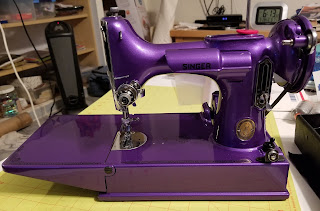 Now off to the movies!

If Hexagons are Hexies, does that mean Octagons are Octies?

Today I sewed some octagons from an awesome Australian design fabric I found at equilter.com... The original fabric looked like this: I cut them into 8 identical strips, stacked those carefully matching the designs and cut them into groups of 8 identical triangles.  I sewed the triangles into pairs, the pairs into fours, and the fours into eights, making kaleidoscopic hexagons: 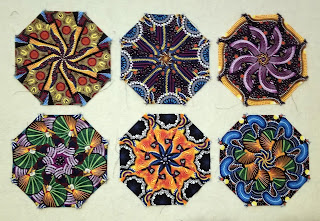 I love how they came out, and I will probably be making more of them... or maybe a mix of hexies and 'octies'...

I've been doing a lot of small things lately - working on bindings (I have currently 8 quilts in the binding queue), a couple round robins, and some individual blocks for Block of the Month projects.

Here are the round robins I've been working on (2-3 months of each challenge):  For my guild's round robin challenge: in January, I added flying geese in the same colors as the embroidery... February, I added the southwest themed appliques to the block.  In March, I added the green 'grassy' outer border and appliqued some bunnies in the grass. 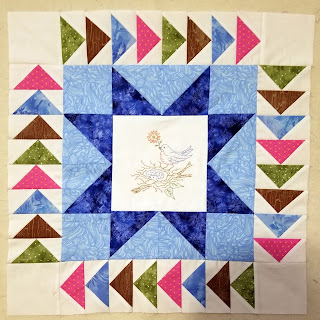 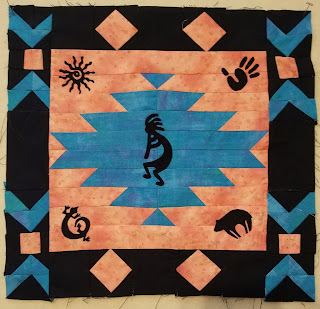 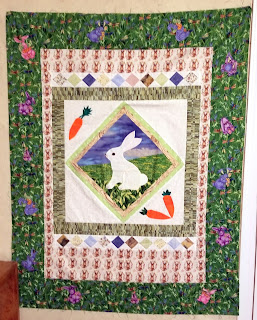 For my mini-group's round robin, which we started in February,  I added four different borders to the first block I got, each one slightly 'land-' or 'sea-' or 'sky-' scapelike, and for March, I was stymied for a long time... the first person added two borders (the blue and the ombre), and it seemed so 'complete'  (and big) already.  I had to think hard to do something original and special.  I ordered 3 yards of the border stripe fabric (one yard at first, but it wasn't enough, so then I ordered two more, but two would have been enough total if I'd thought about it and knew what I'd be doing before I ordered).   I cut it up into groupings of six identical triangles and sewed them into One Block Wonder hexagons... I put these all around the quilt... hope she likes it. 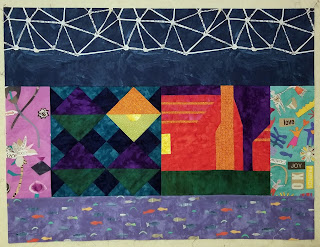 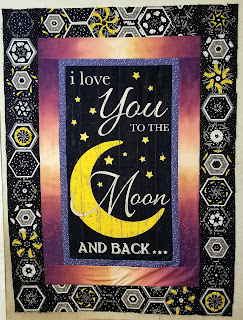 A local quilt shop (LQS for short) has a monthly meeting that several of my friends and I attend.  It is called 'The Get To-Gather'... they give us coupons (so we can feel good about spending lots of money there, lol) and a little freebie (usually fabric or a notion) and a new pattern each month.  This months pattern was a modern mini-bowtie quilt.  Here's mine: 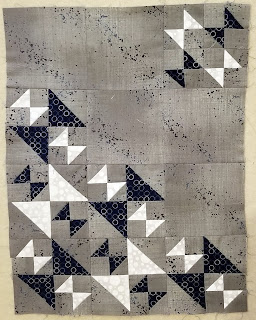 I am also doing a couple of BOMs:  One is called Purrfect Moments and is all fusible applique, with a little piecing  Every  block is a cat with a birdcage... they are all different of course... Here is the beginning of my first block: 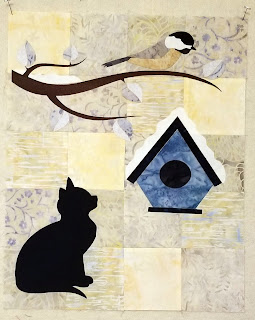 Thimblecreek quilt shop is also doing a mystery quilt, which they give out clues for every other week.  Here are my first six blocks for it... I am doing mine in all batiks... 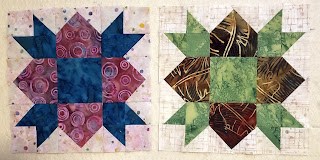 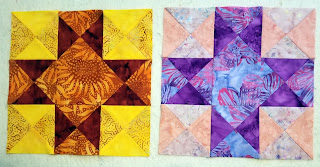 Finished another top as well... Nine-Patch Madness is the pattern (from MSQC), and I used yardage instead of charm packs... I busted a lot of Asian fabrics from stash for this one... used a metallic gold for the first border (not shown in this photo), and still looking for a good border for it.  I love the chained look  of it, and the complex secondary pattern, but the blocks themselves were super easy. 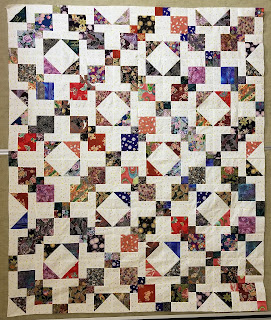 Looking forward to more of these, and a couple of new BOMs as well!  Sew many projects, sew little time, but at least my time in my studio should be more productive now that the sale is over!

I am STABLE !!! (STash Accumulation Beyond Life Expectancy)

I've been working hard the last 2 months, preparing for a major de-stashing sale.  I culled all the fabrics, kits, notions, tools, thread, embellishments, fasteners, and patterns from my stash that I no longer had the desire to work with (or that were duplicates).  I set the sale date as March 17th... a Saturday which was also National Quilting Day (or is it Worldwide Quilting Day - depends on which website you check)... Anyway... most of January was spent thinking about what I did and didn't want any longer.  February was spent starting to sort fabrics for the most part.  The last week of February and the first two weeks of March were spent advertising the sale and gearing up with final decisions on items and sorting more fabric.  Here's a couple of pics of a small percentage of what went into the sale: 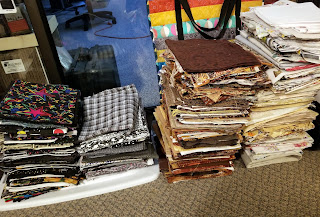 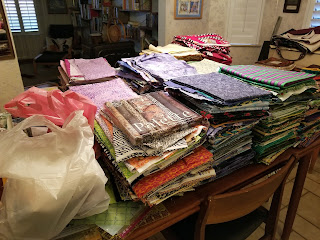 The day of the sale was supposed to rain, but we set everything up indoors (in the garage).  I was afraid rain would keep people away.  But Lo! the day dawned bright and clear, with only a few remaining small clouds.  Crowds showed up right on time and it was almost overwhelming!  I was floored by the response, and much fabric and other items walked out with new owners... My husband was a great help because I was overwhelmed a bit by the response!

We made it through the day and closed up a bit earlier than expected (about 2:15 instead of 3pm), but everyone who wanted to come was gone by then, and we were tired.  We figured if anyone came late, they'd knock and we'd open up for them, no problem... there were no late comers though.

I sold my featherweight and LOTS of fabric and other items.

After the sale, I bagged up ALL the fabric into 12 yard-sized trash bags... four bags FULL for each of three charities - Project Linus, Simi Valley Quilt Guild and Camarillo Quilters Association.  I made sure each set of bags got about equal amounts of each color grouping so no one got stiffed on anything good.  Project Linus came by today and picked up their four bags.  The others will get theirs later.

My big promise to myself was that NOTHING would come back into my stash.  I broke that promise for one (and only one) piece of fabric, which should never have been in the sale in the first place... I'm actually surprised it didn't sell, to be honest, but I'm glad it didn't because I would have sold it, reluctantly, but still would have.  I even sold most of the plastic bins that held so much of these items!  It feels great to be rid of so much 'stuff'.

I'm free of SO much burdensome crap... Feels wonderful!  To give you some perspective, here's what remains of my stash.. as you can see it is still quite ample... I'm not gonna run out of fabric in my lifetime! 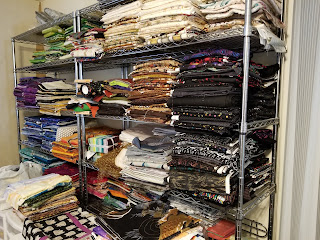