Retreating and other musings

I'm on a quilting retreat right now, sitting in the bedroom posting here.  We are having a great time, which I really needed.  I've been kind of depressed about quilting lately (long story) so haven't done a lot until the frenzy to get ready for retreat.  I didn't even bring that much to do on this retreat because so much of what I have to do is quilting, which I can't do on retreat - It's not fair to the others as actual quilting takes a lot of space (as compared to piecing).  I have three quilts that need pinning too - again space is at a premium on retreat.  SO... that said, I brought one small quilt that needed borders, and another small applique project that needed edge stitching around the motifs.

I put one border on the borderless storm at sea quilt and decided I didn't like what I had originally planned for the border.  I may leave it as is, or add a piano key border made from the medium tones already in the quilt (which I didn't bring with me of course).  I can't decide what to do... sigh.  What do you think? 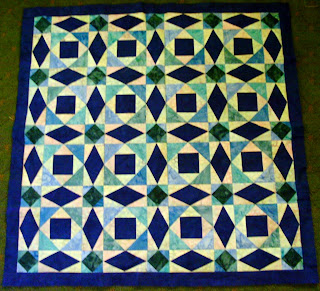 I did all the edge stitching on my small applique quilt which I call Matryoshka (which are Russian nesting dolls). 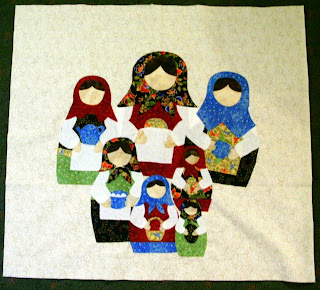 On the way to retreat, I realized I hadn't brought much to do, so I stopped at a quilt shop on the way.  While there, I picked up a cute pattern called 'Strip Joints', and two jelly rolls, one light and one dark.  I cut the pieces yesterday and made the quilt today.  I guess I now 'get' why people love these strip quilts.  It sewed together SO quick, and all I had to do was subcut the strips into little pieces.  Anyway, I decided I don't like pinked edges on precuts - manufacturer's take note - pinked edges make it very difficult to use the pieces accurately. 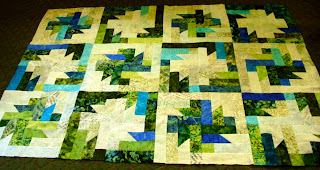 Anyway - here are all our activites on retreat:


While these may not look like fun things to do, we are having a ball!  We run out to Starbucks in the morning, we have been to the local quilt shop here in Ramona twice, we drove out to Julian and did some wine tasting and had a great lunch.... and we've been sewing up a storm.

Marlyn's UFO quilt has been under her bed for years - it's one of the first quilts she ever made and until this weekend it was just a pile of blocks.  Now it is a whole top and ready for quilting!  And the quilt she thought was an ugly pink and khaki quilt is now beautiful!

Debbie's quilt is a Halloween quilt she made in strip club.  I love the colors and movement in it - you can't quite see it all in this photo, since she has the first of four piano key borders pinned onto the side, but it is just charming!!!

Now... why have I been depressed about quilting?  I got expelled from quilting class last week.  The teacher, who shall remain nameless here, was teaching paper piecing and I don't use the same method she does (I don't pin, for example).  I was busily sewing away in my little corner, and a couple of ladies in the class came and asked me what I was doing.  I had the nerve to tell them, I guess.  Two days later, the teacher called me at home and told me I was rude for undermining her teaching and trying to teach her class.  She offered me my money back and told me I could never return to class.  I guess I am just a bad person.  Anyway - I figure she is very insecure in her abilities as a teacher to be so incensed over such a minor thing.  But still, it had me depressed, because my weekly quilting class is a major social event in my week.  I love all the ladies in the class and will miss them terribly.

Ok, enough ranting... I'm going to have a wonderful beef stew dinner now which one of the ladies on retreat made for us all, and then I will get back to work.  I'm out of sewing projects, but I have an applique project that needs all the motifs traced onto Wonderunder.
at September 20, 2012 1 comment: