A Year in the Making

I do a lot of Block of the Month programs... no pressure, or at least little pressure... just one block to do each month, but do enough of them, that's a lot of disparate blocks from different quilts that all have to be made each month... they add up.  Sometimes I get behind... but this is one, I never got behind on til the end... it required a lot of hand embroidery on the blocks, and I saved ALL of that til all the blocks were appliqued, and to add to it, I made two of these quilts (one for me and one for Sunny Saints Saint Bernard Rescue, where I've gotten my last three dogs from, to use as a fund raiser).  Eleven blocks in the quilt, so 22 blocks made, plus all the embroidery, and this week, I cut and sewed all the sashing and borders. 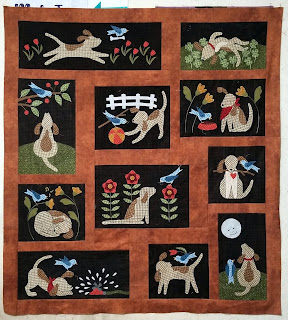 The quilt needs a bit more applique (20 appliqued paw prints on each of the two quilts)... and then I have to quilt them too! (btw, the dogs get button eyes after the quilting is done... I know it looks a little creepy since they don't have eyes yet)

I'm leaving on a quilting retreat next Thursday... 4 days at the beach, with 20 other dedicated quilters and nothing to do but sew, sew sew!!!  I'm hoping to get the applique done on this one before the end of the retreat, and I have lots of other things to work on as well.  It will be a very busy weekend, but I am SO looking forward to it!

Here it is March and I've only JUST completed my second quilt for 2019.  I feel like I am falling further and further behind... I've got a huge pile of quilts needing just bindings and my pile of quilts needing quilting is getting larger.   Oh my... how do I stop starting new things and finish what I've got... but ... um... SQUIRREL!!!!  Can you say 'easily distracted?'... lol

Here is my Diamond Tiles quilt (begun last year from Bonnie Hunter's block from the May/June 2018 issue of Quiltmaker Magazine). 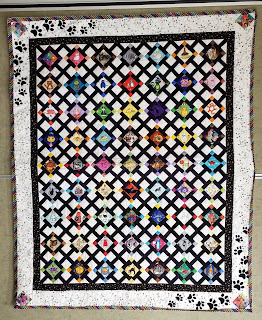 This picture was taken before the binding was finished.  Every diamond has a different fussy-cut cat from a different cat fabric (except for the four corner pieces, which were all made from the same fabric, but a different cat in each one).  Had so much fun making this one, including the corner appliques.  Gotta love those kitty pawprints!

Here are a couple of close up pics of the quilt, one showing the corner detail and the applique, the other showing some of the diamond tile blocks: 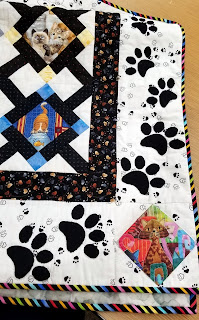 It does give me a heady, accomplished sensation to finish a quilt and call it done, but how do I translate that into encouragement to get to work on the ones in progress???  I think I need an intervention!
at March 27, 2019 5 comments:

Make Time for Yourself

Wise words... most of us don't take enough time for ourselves... we all have so many roles in life we must fulfill... I am mother to a wonderful son, 'mother-of-cats' (a GoT reference for my fellow fans) and mother to 2 Saint Bernards too (drool rules!), homeowner (but not housekeeper), quilter, artist, activist, roleplayer, gamer, teacher...  I know others have even busier lives, with work, home, family, and all the personal obligations that keep us all so busy...  and most of us don't take time for ourselves.  We need to recharge, relax and sometimes just contemplate things... anythings!

And that brings me to the quilt segment I finished this last weekend... block 5 of Dear Daughter, emblazoned with the words 'Make Time for Yourself'.  This gave me a lot to think about while I was working on it. 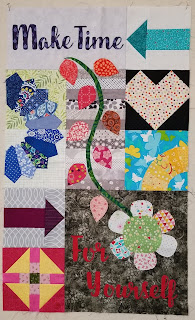 I went on a girlfriend's trip this last week, 2 1/2 days driving up and staying at Yosemite, touring the valley, visiting falls, springs, mountains, and pioneer cabins and structures.  Because of this, I opted to skip a couple of weekend activities I had scheduled while thinking about making time... instead, I spent some time with my husband, buying a new sofa, going to the movies together and just hanging about the house together.  I did squeeze in some community time and some sewing time too.... making another Harry Potter block (Snape this time), adding some eyebrows because he looked too expressionless. 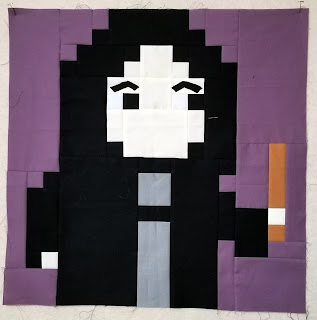 Today, the dogs need to go to the groomer, my housekeepers are coming, and I'm almost out of dry cat food.  The rushing around like a scatterbrained chicken begins again....

Despite still trying to cough up a lung or two, I got to work early this morning and finished all the applique for part four of my Dear Daughter quilt.  I figured since I got the applique done around 9:30, I might as well sew the blocks together too and call it done.  If I were a little more ambitious or feeling up to being picky, I might reposition a few things, but for my present condition, it's good enough and I'm calling it done. 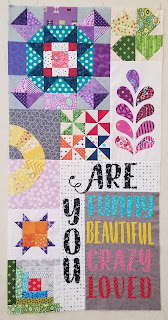 Working on this was my consolation for missing a guild meeting this morning, but I don't want to spread this, if there's a chance I'm still contagious.  Tomorrow I absolutely HAVE to go out for a bit, so might as well heal as long as possible in the comfort of home and pajamas.  Time for some tea and feet up on the sofa!
at March 12, 2019 3 comments:

Being sick can play hell with your mojo...

Okay, I guess we all have sick days from time to time.  I guess I'm lucky that I'm not physically sick very often.  I get my flu shot every year, and just don't tend to catch colds very often, at least not since my son got out of school (he used to catch EVERYthing and bring it home during his school days, esp. elementary school.  I caught everything he brought home, too).

This time I picked up this cold that's been going around:  chest congestion and bad cough.  I think I caught it from one of my besties who had it 2 weeks ago.  It took her almost 2 weeks to get over it, and I came down with my first symptoms last Tuesday.... which means I've still got a week to go?  Anyway, no fever, no aches and pains, just 2 days of laryngitis followed by an annoying cough that keeps me up at night and leaves me with little to no energy.

I haven't sewed much since I came down with this... Missed 2 sewing club meetings already (last Thursday and Saturday.  I went to Wednesday's sew-in because I wasn't coughing yet, still had the laryngitis, tho)...

I have been stressing out over how much sewing I HAVEN'T been doing... I'm falling behind on many projects.  Despite all all the stress and the lack of energy or initiative, I made myself do a block today - cut this morning, sewed this afternoon, and done!  Hermione is finished. 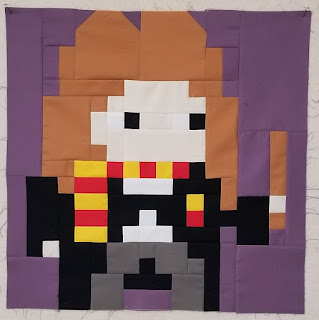 Next week, Harry's Wand is going to be released, I hope I'm over this by then.

Sunday (yesterday), DH and I went to the Ahmanson, me with lots of meds to keep the coughing under control.  Thought we were going to see Roger's and Hammerstein's Cinderella (the musical).. instead it was a new ballet production with music by Prokofiev.  The music was fine, but the story and the dancing were painful to watch.  We left at the first (of two) intermission.  We weren't the only ones.  I am NOT re-upping my season tickets for next year.... we'll just buy full price tix for the few things we ARE interested in seeing there.  So very disappointed... it was a long drive and a lot of stairs for something we were highly disappointed by.  (Not just because it wasn't what we were expecting - but it was just so abysmally bad all by itself).  Anyway, enough griping.

Tomorrow I will skip my morning guild meeting I think and stay home.  If I feel up to sewing, great... if not, I will just take my meds and try to survive the day.

Despite being crazy busy with social obligations this weekend (all day Saturday (9:30 am til 10:30pm), Sunday evening 5:30pm til 2am monday, and Monday evening 5:30-7:30), I managed to get all the applique fused for Dear Daughter section 4, all the cutting and piecing for month 3 of Out of this World (4 identical blocks), and block 7 of the Harry Potter quiltalong (Harry's glasses). I'm feeling very accomplished... none of it is perfect, but it's done and I'm happy with it.

Looking forward to finishing up the applique (that's a LOT of blanket stitching in my future), fusing and sewing my Enchanted Gardens blocks and working on other projects as well... I've got SO many UFOs!!! And I've got a binding queue that just keeps growing and I haven't worked on a binding for at least week! It seems I'm #20 on the Queen's list too.... I'd better get busy on one of those bindings quick!
Tomorrow I go to my sewing 'club', but don't know how much I can do, as I've got a new quilter who needs a lot of guidance and doesn't really listen, does her own thing anyway. sigh. At least I get to see quilting friends and socialize!
at March 05, 2019 No comments: