I am almost finished with my hidden wells quilt, or at least I hope so.  I went to a sew-in tonight and worked on it there.  Unfortunately, the lady who brings the iron didn't show up tonight, so I sewed the blocks together and sort of finger-pressed them, which was tough with all those bias edges and seams.  Putting the blocks into rows wasn't so bad, sewing the rows together was a real b*tch though.

Then I had to cut and sew on the first border without benefit of iron, of course.  Not sure if I got the sizes right onthe strips but it all seemed to come together alright.  No more bias edges!  I still have one more border to put on.  I also still have to put the border on the table runner I made with the leftover blocks. 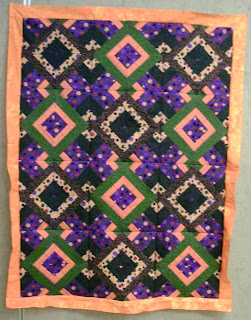 As you can see, it's badly in need of a real pressing, but I'm really happy with how it came out... all those odd mis-matched fabrics and something pretty and unusual came out of them.

I am now planning a second hidden wells quilt with 7 fabrics, a lot of brights with a little black and a focal fabric that ties them all together.  We'll see how it comes out.  I am saving this second quilt to work on at my quilting retreat in November.

I have to admit the process of making these quilts is quite fun and addictive, but I'm not sure I enjoy working with all the bias edges.  I'm glad I put the first border on right away to secure those edges down - the starch I used wasn't quite enough, I'm afraid.

Well, time to head off to watch a little tv with the husband... a little non-quilting time is what I need now.

So I am working on a new quilt.  The pattern is called "Hidden Wells" and was originally published by Mary Ellen Hopkins.  Her books on this pattern are long out of print and I was unable to find any copies on ebay or any other auction site.  So I joined an internet group that was all about making the Hidden Wells quilt and got this link from them: Hidden Wells, Waterworld.  This page has an easy to understand (mostly) tutorial on how to make the quilt.  I picked six fabrics (though I'm told it should have been an uneven number like 5 or 7, six was what I had to work with and it turned out okay, so I'm not worried about it).

My first two blocks came out looking like this: 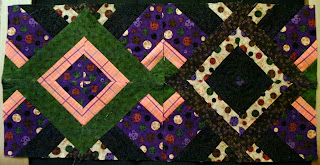 I have since made a total of 16 blocks, but I think I only need 12 for the quilt I'm going to make, so the extra blocks will make a nice tablerunner for Halloween (the bright color in there is orange, not pink).  I will post a picture of the completed quilt top as soon as I put the blocks together.  Each block is composed of 4 sections but they are SO easy to make because though it looks complex, it is all done with easy strip piecing.  (All explained on the Waterworld site, linked above, so I won't even try to repeat the tutorial here).

Anyway, I cannot believe how simple and easy this quilt was to make, and it was FUN, because you don't know what you're going to get until you open up the blocks and put them together - it's like a little magical puzzle!  I suppose with enough careful planning, you can know in advance what your quilt will look like, but where is the fun in that?

Anyway, on a non-quilting note, I had a lovely evening of dinner out and a play tonight.  We went to 'Scream Queens' at the Kentwood Theatre in Westchester.  It was a lot of fun, with great company!  Nice to have an evening out for a change of pace.

Tomorrow and Sunday will be non-quilting days because of prior commitments, but perhaps Monday I will get to back to sewing and quilting!  I think the first order of business will be to get some live cable feed into my new quilting studio and get a tv to put into that room.  I know I will spend more time in there if I have some 'company' in the form of the tv.  I rarely watch it during the day, but I like to listen with an occasional glance at the screen.