My mini group is doing a round robin this year.  There are 7 of us participating and this month was our second month.  I put borders on an eagle panel this month, adding only 2 borders (top and bottom rail fence blocks) with some appliqued stars.  I knew when I started that I needed to calm down the first border of scrappy Americana squares with a more solid looking border. 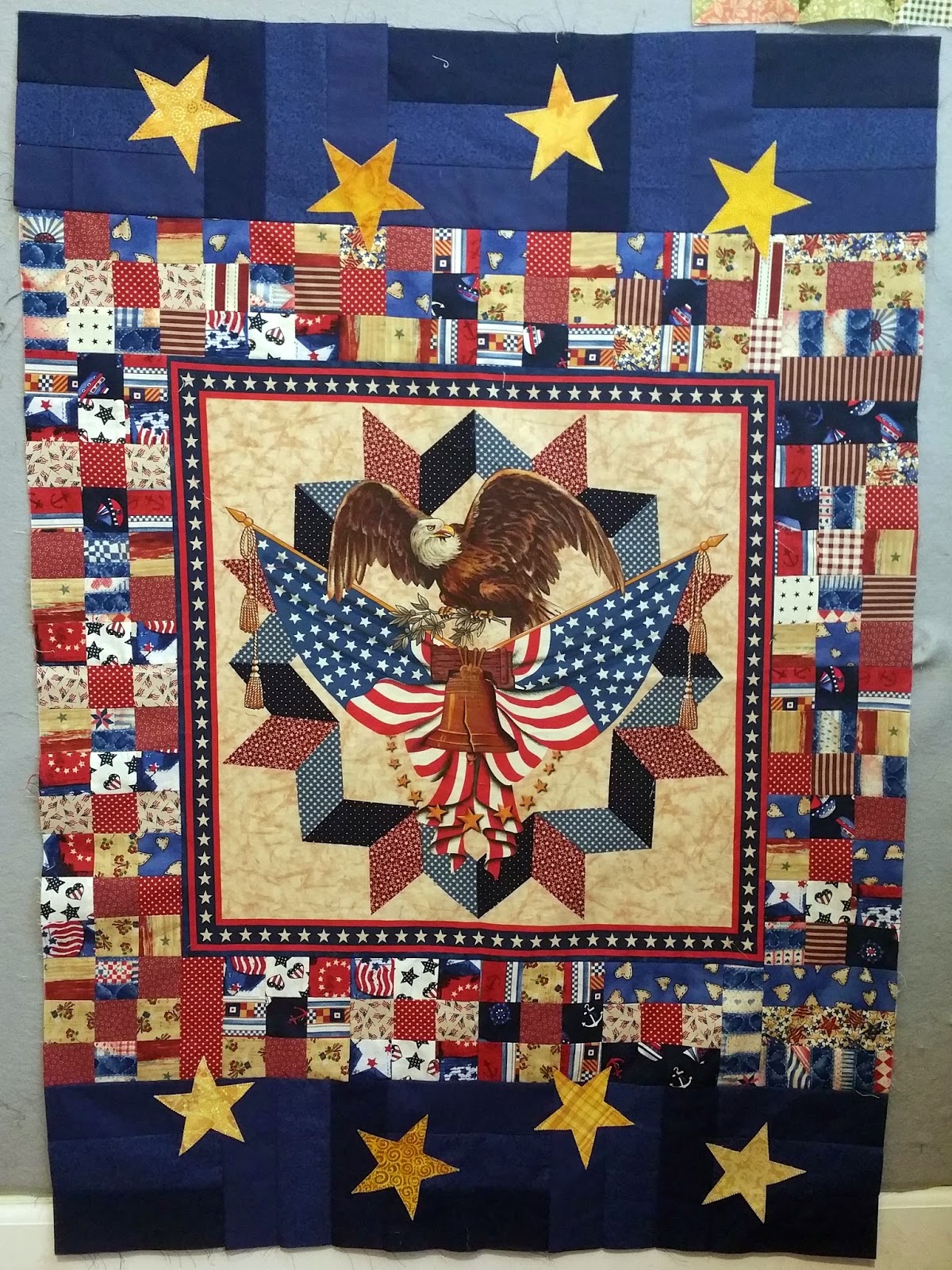 However, I didn't put it on the design wall before doing the stars, and I might have rearranged them a little if I'd seen it from a distance first.  Still, I'm happy enough with it as is... I hope the owner likes it when she gets it.  The way it's going, it is going to be a good sized quilt by the time it's done - it's already about 24" x 36".

Other than this little foray into the studio, I've done little quilting of late.  Yesterday was Worldwide Quilting Day and to celebrate (well, not really, they just happened to coincide) we had a quilter's yard sale.  I took 5 bins of fabric and sold some of it... I only made about $300 but it doesn't even look like I made a dent in what I took with me... I will need to do it again to sell more... I just need to get rid of more fabric I no longer want!  Especially if we might move in the next few months (probably not gonna happen, but you never know).

Sewing through the Pain

I signed up for a class to be held the 28th of March.  Part of the preparation for the class was to make sixteen 9 1/2" blocks in advance.  I decided I wanted to make the project out of selvage blocks so I made sixteen of them.  By the time I was done making them, three days later, my right wrist was killing me.  I managed to work through the pain to piece them into an 8x2 panel of blocks:

The pain was the result of constantly raising and lowering the needle with the wheel on the right side of the machine.  I'd forgotten I had a button that did that on the front of the machine... would have been much easier and caused me no pain.  Ah well, live and learn... or in this case live and remember.  Next time I hope I recall this little lesson.  My wrist hurt so bad that when I went to see the Buddy Holly Story at the Civic Arts Center last night, I couldn't even applaud.  Tonight I will take some pain meds I think.

I spent yesterday quilting the blocks so that they can be made into a bag.... that part was easy peasy in comparison to the piecing and I DID use the button instead of the wheel to lift the needle.

Now I have one week to prepare for a fabric sale.  I hope to get rid of at least a couple of bins of fabric to quilters who have less.  I sell the stuff I no longer want for $3 a yard, so it's a great deal.  So sad to let go of some of it, but I know I'll never use it all.  Besides, we just put an offer in on a new house and the less we have to pack and move, the better.

It feels good to purge stuff I don't want any more... as artists, often our tastes change over time.  Lots of fabric I loved, and just don't anymore... and then there's the stuff that I look at and think 'What was I thinking???' and can't imagine why I bought it in the first place.  All of it has to go.

Last year after this sale, I felt SO good, and I took the money and invested it in stock, rather than more fabric which felt really great to be doing something productive with the money.  This year, that fabric money may be going toward things for a new house... we shall see.