Last September/October (2018), I went on an excursion to London, followed by a two week Mediterranean cruise on RCCL.  It was, of course, a quilting cruise, so on sea days, we sewed.  The teachers on the cruise taught a few different things, but on the way TO Italy, I worked on my own projects (the wonky bear claws and some applique blocks I wanted to surround with pieced borders with applique over them - I did all the piecing on the cruise). 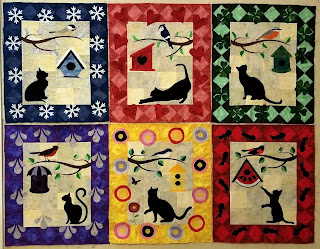 On the way back to Southampton, I actually took the class Linda Ballard was teaching and made this quilt: 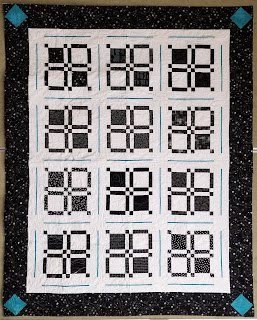 It was offered as a mystery quilt, with blocks based on a traditional block which I don't know the name of.  I have decided to call thw quilt 'Square Deal'.. I changed the cornerstones (they were suppoed to be white square corners, I made them turquiose square in a square corners to match the color of the narrow lines in the sashing.  I haven't decided on binding yet... black, white or turquoise... I'll have to decide soon.  Linda is speaking at my guild in September and I'd like to have this labelled and bound to show while she's there.  Since I am going on retreat next week in Big Bear, taking this along to get the binding on would be perfect timing.
at August 08, 2019