I've been so tired lately.  I think depression is creeping in on me again.  I've even had to force myself to do fun activities.  Not sure why this is happening... there's been no change in my meds or anything.  Maybe it's the impending anniversary and birthday?  You know, those things we used to look forward to and are now just indicators of another start to the yearly 365-day trip around the sun.  Time to get back in gear and enjoy the journey.

In the meantime, even though I haven't been feeling exactly my best, I have been working.  I've been doing my blocks of the month, which isn't exactly taking anything off the UFO list, but it does cycle to the next month at least without getting behind.  I've heard it said that accomplishing tasks produces endorphins which increase pleasure.  If that's the case, my endorphins aren't working hard enough, or maybe it's just that I'm not?

Here is my latest folk art cat quilt, with the handwork done (I did the handwork on the entire quilt this month!, not just on the current block.  hooray for me!)  He even has eyes now! 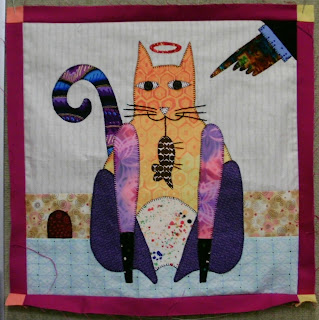 I did the latest Henrietta Whiskers block (with handwork done as well): 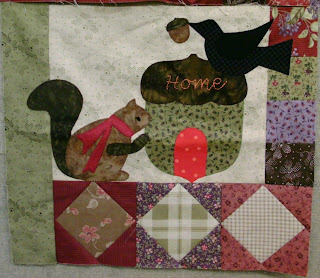 I also finished block 3 of Pumpkin Hill, which I started by doing two blocks in June even though it's supposed to be a block of the month.  I figure since I'm doing this one on my own, not through a website or store or anything, I can do as many or few as I want each month.  I've since decided to stick to one per month.  Here's this month: 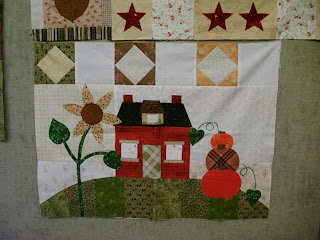 Until this year, I'd only done one BOM - it was online, I loved doing it, but I never put the blocks together into a quilt - another UFO I forgot about and need to add to the list.  This year I WILL put them all together and finish what I've started.  I have already cut the piano key border for the kitty quilt, with plans to sew the keys together as soon as the quilt is finished.  I have no excuses for not finishing except August, with birthday and anniversary is usually a busy month for me.  I will try not to make excuses for this labor of love.

Here's the rest of the folk art cats so far - with handwork done (including those pesky eye buttons): 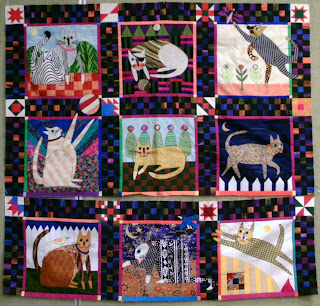 So all in all, I have been productive.  I should feel good about that.  Time to get back to work and get those positive endorphins flowing.  Yeah!